Due to the fact that our snow-white kittens from the “S” litter are already 8 weeks old, we decided to go to the Centaurus Specialist Veterinary Clinic in Gliwice to perform a hearing test based on BAER / BAEP method (Brainstem Auditory Evoked Response / Brainstem Auditory Evoked Potential – examination of auditory brainstem responses / brainstem response to acoustic stimulus). This is the only method that provides 100% certainty that a cat can hear.

We are pleased to inform that today, i.e. October 31, 2020, all our snowflakes have received a hearing certificate, which means that they can hear. I would also like to mention that all cats bred in Dudoland*PL have been taking hearing tests successfully from the beginning of our adventure with this colour. I am often asked about the details and relevance of this test. Therefore, I decided to answer your questions in the form of this article.

Cats with snow-white hair without a trace of another colour are exceptionally beautiful and elegant. Though, white hair often goes hand in hand with hypersensitivity to UV rays, eye sensitivity and … deafness. Why are white cats more prone to deafness than others?

How can I tell if my cat is deaf?

The cat’s hearing can be determined through a simple non-invasive BAER test, which is performed in some specialized veterinary clinics only by certified veterinarians. During the test, the vet will insert four small subcutaneous electrodes, similar to acupuncture needles, through the animal’s skin.  The needle electrodes are placed above or between the eyes, on the nape, behind the left ear and behind the right ear. Then, foam-wrapped tubes are inserted into the animal’s ears through which acoustic stimuli of
a certain intensity will be applied, emitted in the form of audio clicks and pops.

The test helps to identify both complete and partial deafness, including single-sided deafness. In white kittens, the test is simply carried out to determine whether the animal can hear or not (there is no need for detailed measurements, such as in the case of suspected secondary deafness caused by an ear disease) – the test itself is short and should not make your pet impatient.

Thanks to this test, you can determine whether your cat is completely or partially deaf, and whether it is a single-sides deafness (SSD) or bilateral hearing loss. The BAER test is absolutely safe – the same test is carried out in people of all ages, including infants.

The hearing test device generates audio clicks and pops with a certain noise volume (dB). The test can only be performed on a conscious adult animal if it is very calm and can keep its head still. The most unpleasant part of the test for the animal is when the foams are inserted into its’ ears and audio clicks are generated. This actually determines the need for anaesthesia. Therefore, in order for the test to be performed correctly and for us to be able to assess the parameters of the waves obtained during emission of sounds, the animal patient should be very lightly sedated.

The best time to conduct a hearing test in young cats is the age of 8 weeks due to the constant development of the animal.

Summing up, every honest and reliable breeder should invest time and money in the above-mentioned test whatever the purpose of a snow-white “gnome”. Be responsible – HAVE YOUR WHITE CATS BAER-TESTED!!!! 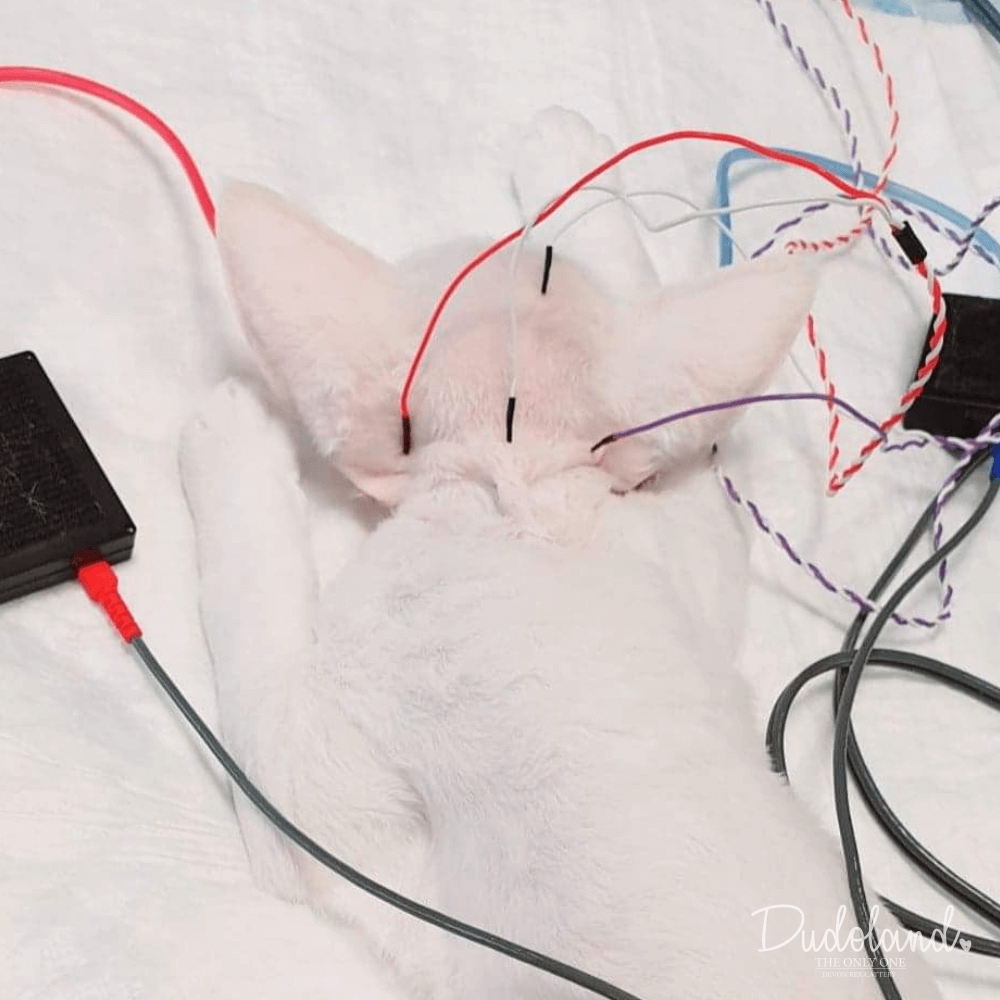 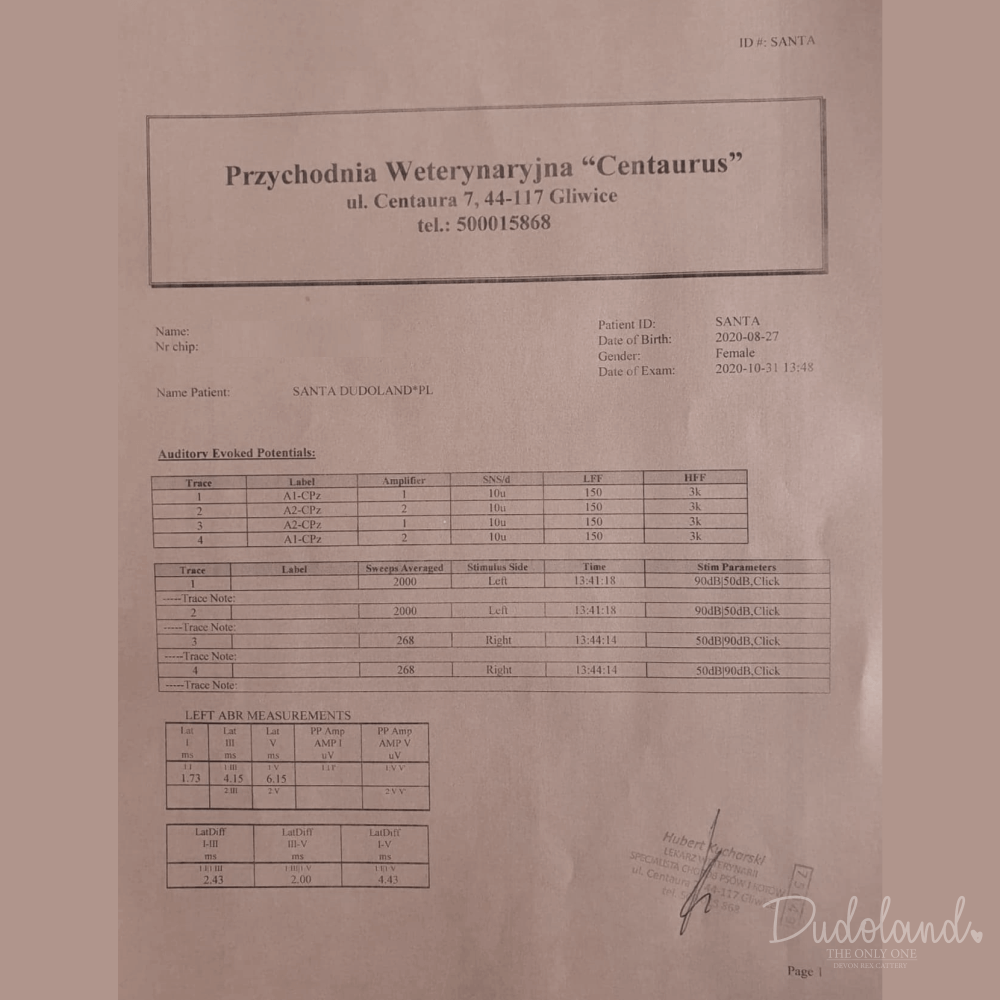 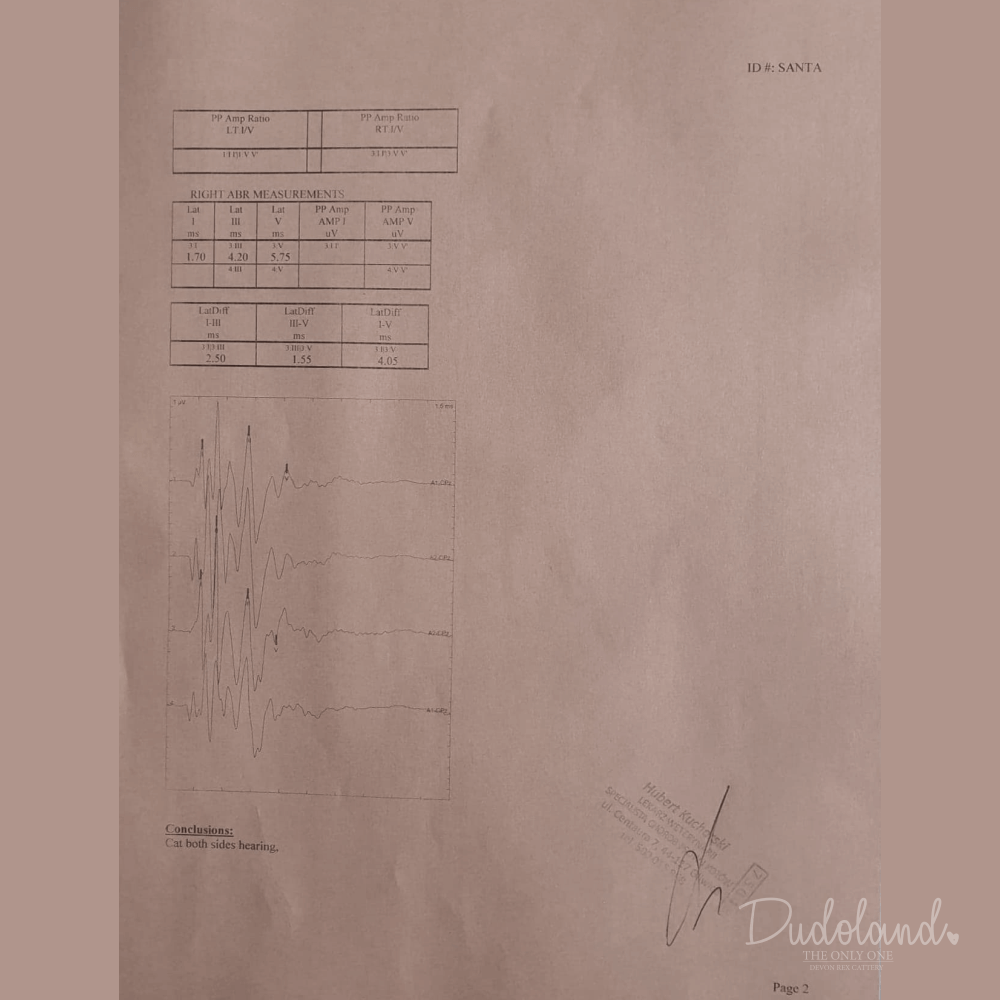